A Well, A Woman and Living Water 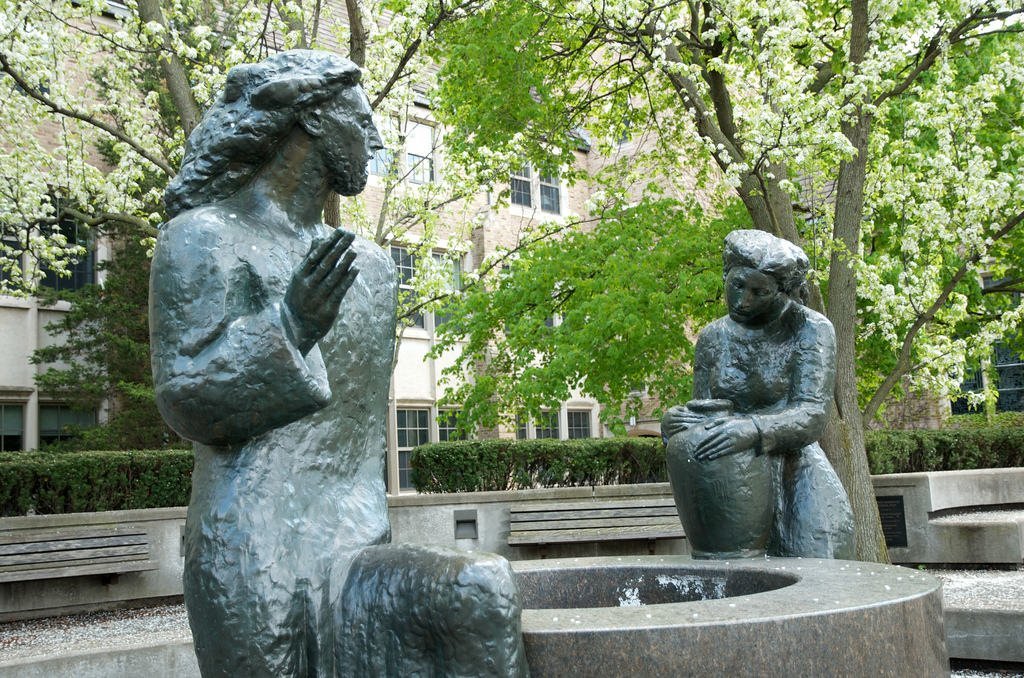 Jesus traveled through Samaria. He and His disciples were on the run because they had become marked men. Their movement had become bigger than that of John the Baptist.

John the Baptist conducted his ministry out of the way, down at the Jordan River. And, the Baptist’s eccentric ways, his camel-hair and leather clothes, his diet of locusts and honey, made him easier to dismiss. John, however, made an issue of Herod and his unlawful taking of his brother’s wife; this landed him in prison and eventually would cost him his head.

Jesus’ approach was not like the Baptist’s. He came right to Jerusalem and strode into the Temple compound with a small whip He had fashioned Himself. He tossed tables, opened animal cages, and sent coins flying. With His zeal and His signs, He made waves. He now commanded the attention of the religious leaders, and so He got out of town

Samaria was an area “good” religious Jews avoided as unclean for the people there practiced what was viewed as a corrupted form of worship. Most Jews refused to even set foot in the region. But, as we see in John 4, Jesus had no problem going to Samaria. In fact, the Scripture says He had to go through the region.

The weary Jesus even took a seat there, at Jacob’s well in the town of Sychar.

An Empty Jar, an Empty Heart

A woman showed up, a Samaritan who came to draw water in the middle of the day; it was a strange time to be at the well in arid Palestine. Her story, as revealed by Jesus, tells us why she was there at that moment. Her notoriety hung over this small town and she was subject to gossip and scorn for the life she led. She came now to get her water so she didn’t have to face critical glances and listen to wagging tongues.

Jesus stunned her by first asking for a drink since Jews had no dealings with the Samaritans. Then, He confounded her with talk of His living water of eternal life, a “drink” that makes one never to be thirsty again.

Intrigued, the woman asked Jesus to give her His living water. He told her to go fetch her husband first. She said she had no husband, and Jesus commended her honesty. “You are right in saying, ‘I have no husband’; for you have had five husbands, and the one you now have is not your husband. What you have said is true” (John 4:18).

More than an empty water jug, this woman had an empty heart. Jesus’ words pierced her. She recognized His authority and power. She knew something about worship and she knew the promise of the Messiah. “When He comes, He will tell us all things,” she said.

The Messiah had come — to her, of all people. He told her straight – “I am He” (see John 4:36). And, He did tell her all things: “… the hour is coming, and is now here, when the true worshippers will worship the Father in spirit and truth, for the Father is seeking such people to worship Him. God is spirit, and those who worship must worship in spirit and truth” (John 4:23-24).

The encounter changed this woman. She left her water pot behind and ran to tell the town of the Messiah, the One who told her all she had ever done. The people listened to her and came to see Jesus. They heard Him and believed. He spent two days with the folks of Sychar – this Samaritan town was transformed into a place of true worship. Really, it was now a place more holy than the Temple with its merchandizing and empty rituals.

True worship transforms. This woman drank deeply from the well that Jesus brought to her. She believed and led others to believe.

How many people like this woman are out there for us to meet? Would we consider sitting with them as Jesus sat with her?

Our present society is a lot like the woman at the well. This age has wedded itself to husband after husband, to ideology after ideology, to program after program, to philosophy after philosophy. Each new thing fails to furnish fulfillment and every vain imagination leads to a venting of rage (see Psalm 2).

Places such as Samaria and Sychar are all about us. Will we go into them? Jesus has sent us. Let’s take a seat at the wells, at the restaurants and coffee shops and bus stops. Let us listen and learn and share and love.

The matters that so weigh heavily upon our cities, our states, and our nations are matters that are beyond legislation, politics, and decree. Issues of the heart must be answered with the Living Water.

Shall we let it flow?

For more about the emptiness that plagues human hearts and how we can help, listen to “Sandwiches and Wisdom,” a message preached by Thomas Schaller at Greater Grace Church in Baltimore.