The Weapons of the Shepherd 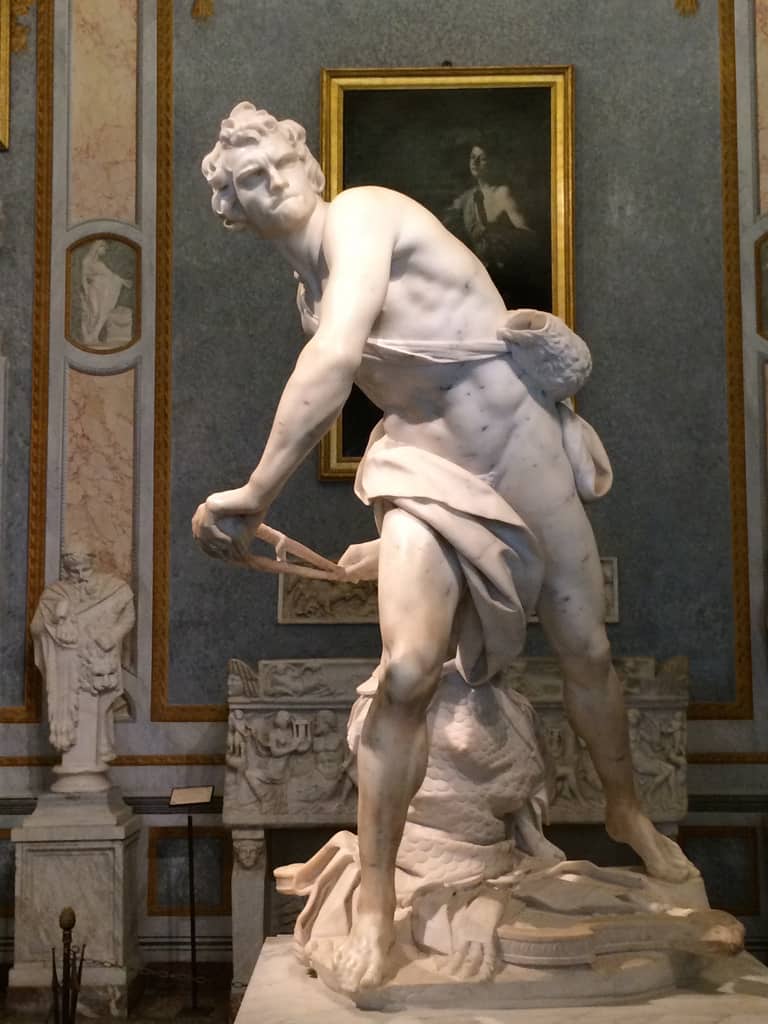 A staff, a sling and a bag – these were the things that David brought to the field of battle. These tools of the shepherd represented his only weapons.

Bellowing out threats and curses across the valley was the Philistine giant, Goliath of Gath. For forty days, this beast stomped out before the army of Israel. He dared anyone to take him on. He announced himself as a champion and was arrayed in heavy metal. Brass armor covered much of his body. He carried a thick and heavy spear.

This display was clearly designed to intimidate. It served just that purpose for the Philistines. The two armies stood frozen in their positions in the valley of Elah. None among the troops of Israel stepped forward. King Saul, the man who stood head and shoulders taller than any of his subjects, did not know what to do.

Until David showed up, that is.

Sent by his father, Jesse, with food for his soldier/brothers and their commanders, David arrived just in time to hear Goliath roar off one of his daily boasts. He listened to what the giant had to say and sniffed at it. The shepherd boy saw the giant as nothing more than a big bully. He marveled that none among the ranks of Israel, whose God is THE LORD, went at him.

It seems that what bothered David most was Goliath’s mockery of God. He let everyone know it, too – “Who is this uncircumcised Philistine, that he should defy the armies of the living God?” (1 Samuel 17:26). His talk irritated his big brothers who questioned David about the “few sheep” in his care and accused him of just coming to be a spectator of the battle.

Battle? What battle? No one – at least on Israel’s side – seemed ready, willing, or able to fight, and this included the king.

Those 'few sheep' his brothers spoke of were precisely what prepared him for this moment. Click To Tweet

David at once offered to take up the challenge. Those “few sheep” his brothers spoke of were precisely what had prepared him for this moment. He was a true shepherd, a man with a heart to protect and preserve. Bears and lions spied his flock in the wilderness and saw their breakfast, lunch, and dinner.  These predators soon discovered that a warrior watched over these little ones.

Saul at first viewed David as a youth and no match for the Philistine. As David spoke to him, however, of his exploits with the sheep, the king softened his stance. Saul agreed to let him face the giant and dressed the boy in his own royal armor – after all, the helmet and various weapons weren’t being used by anyone at this point.

I can imagine David struggling with this ill-fitting uniform. It was obvious to him immediately that he preferred to fight his own way with the tools of his trade. Goliath would go down as the lion and the bear had gone down or he would not go down at all.

David ran to the nearby stream and filled his pouch with smooth stones that would make for perfect projectiles. He had all that he needed. He committed the fight to the Lord.

With his staff, his sling, and his bag, David hastened toward the enemy.

Goliath chortled at the sight of the shepherd. He giggled and belched out more curses. He bragged that David would soon be bird food.  The shepherd, however, answered him with prayers and praises to the Lord as he ran forward. Soon, the giant was minus his head and the Philistines were without their champion. Israel plundered their enemy and David’s story has become a rallying cry for small, dismissed, overlooked underdogs everywhere.

The Flock is the Secret

David did it with his staff, his sling, and his bag. His path to this most remarkable triumph began with his father’s flock. The shepherd’s heart beat strong in him and made him courageous. That little flock was the secret to David’s strength. His brothers may have disdained his work with the “few sheep” in the wilderness, but God took note of it and saw a man after His own heart.

Psalm 78 says this of David: “He chose David also his servant, and took him from the sheepfolds: From following the ewes great with young he brought him to feed Jacob his people, and Israel his inheritance” (verses 70-71).

How did David become the warrior that he was? It was during those moments he chose to defend “the ewes great with young.” His faithful attitude toward lumbering, pregnant sheep made all the difference. This was the qualifying factor on his leadership résumé.

David was a good shepherd, for the sheep came first. Goliath really had no chance. This heart was too true and too committed to the glory of God and the care of His people to fail. He had to fight. He ran to the battle with all that he needed to win – a staff, a sling, and a bag.