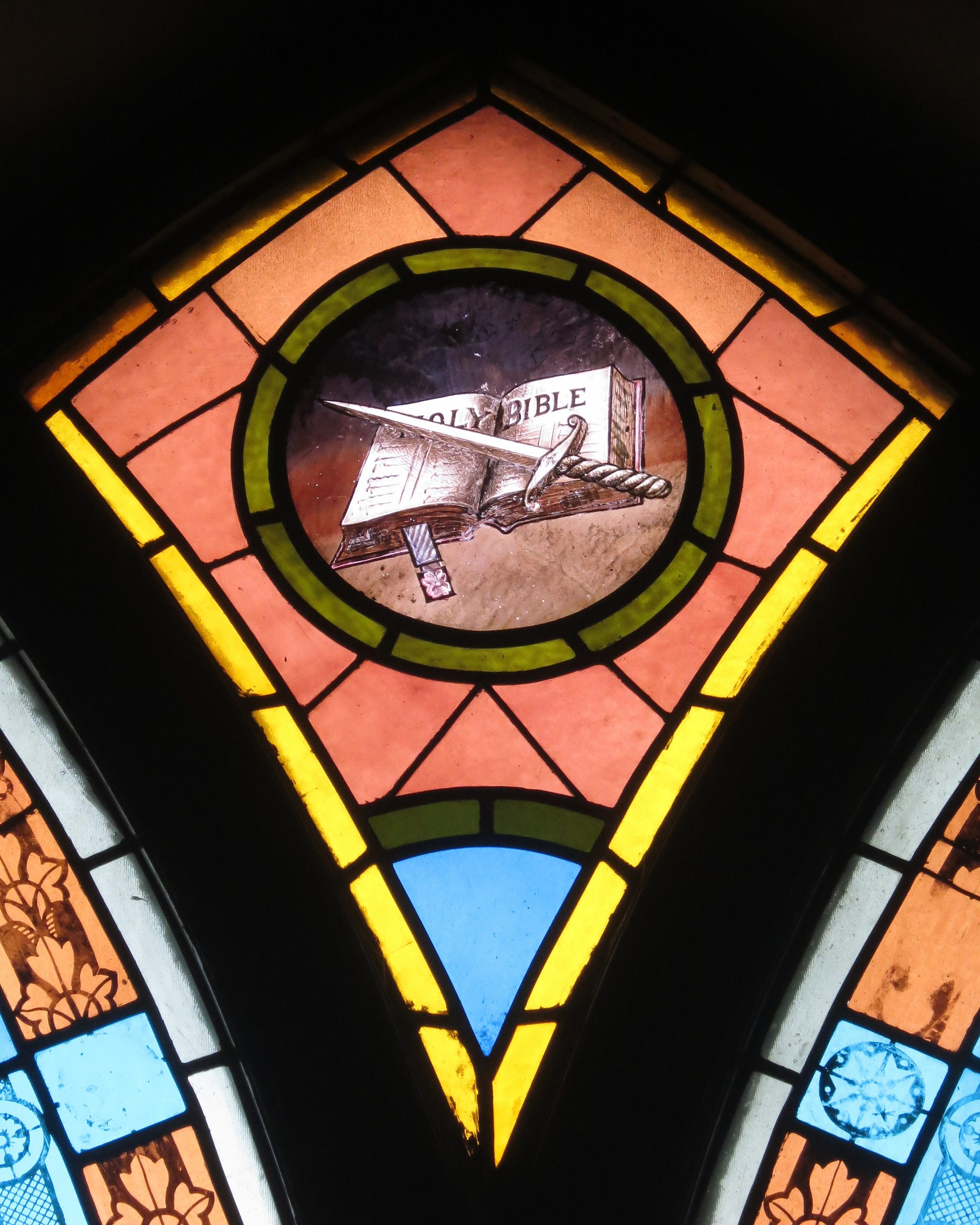 “When Jesus had spoken these words, He went forth with His disciples over the ravine of the Kidron, where there was a garden, in which He entered with His disciples. Now Judas also, who was betraying Him, knew the place, for Jesus had often met there with His disciples. Judas then, having received the Roman cohort and officers from the chief priests and the Pharisees, came there with lanterns and torches and weapons. So Jesus, knowing all the things that were coming upon Him, went forth and said to them, ‘Whom do you seek?’ They answered Him, ‘Jesus the Nazarene.’ He said to them, ‘I am He.’ And Judas also, who was betraying Him, was standing with them. So when He said to them, ‘I am He,’ they drew back and fell to the ground. Therefore He again asked them, ‘Whom do you seek?’ And they said, ‘Jesus the Nazarene.’ Jesus answered, ‘I told you that I am He; so if you seek Me, let these go their way,’  to fulfill the word which He spoke, ‘Of those whom You have given Me I lost not one.’ Simon Peter then, having a sword, drew it and struck the high priest’s slave, and cut off his right ear; and the slave’s name was Malchus” (John 18:1-10).

There are many Christians who are not cognizant of the important role that the devil and his demons play in undermining one’s relationship with God and the purpose of a believer in God’s ongoing work in the world. Judas Iscariot is a central figure in the passion of Christ and an illustration of how a man can be used to bring about Satan’s opposition to the perfect plan of the redemption of man. The story of Jesus’s betrayal (paradidomai–the delivering of another with evil intent) is the fulfillment of an Old Testament prophecy in Psalm 41:9, “Even my close friend in whom I trusted, who ate my bread, has lifted up his heel against me.”Jesus was prepared for it, but the effect it had on Him was still difficult. Understanding that evil is not only present in the world, but also active, means that the believer needs to learn to recognize spiritual warfare.

Luke 22:3 tells us that Satan, himself entered into Judas, not delegating that responsibility to his demons. Man cannot only be possessed by demons, but also obsessed, meaning that even a believer’s mind can be totally pre-occupied with evil; only non-believers can be demon possessed.It is my conviction that Judas was a thief (John 12:6) and his heart condition among others opened the door for the satanic possession.

There are 2 Greek words for evil and Vines Dictionary has a good explanation of the two. The word “kakos stands for ‘whatever is evil in character, base,’ in distinction (wherever the distinction is observable) from poneros, which indicates ‘what is evil in influence and effect, malicious, malignant.’ Kakos is the wider term and often covers the meaning of poneros. Kakos is antithetic to kalos, ‘fair, advisable, good in character,’ and to agathos, ‘beneficial, useful, good in act’; hence it denotes what is useless, incapable, bad; poneros is essentially antithetic to chrestos, ‘kind, gracious, serviceable’; hence it denotes what is destructive, injurious, evil.”

In Romans 7:21, kakos is used: “I find then the principle [law]that evil [kakos]is present in me, the one who wants to do good.” John 7:7 explains, “The world cannot hate you, but it hates Me because I testify of it, that its deeds are evil [poneros].” Kakos is the general term that represents evil compared to good, while poneros is that evil which corrupts and is the source of conspiracies.Both are representative of the methods used by the devil and his kingdom.

“The one who practices sin is of the devil; for the devil has sinned from the beginning. The Son of God appeared for this purpose, to destroy the works of the devil. No one who is born of God practices sin, because His seed abides in him; and he cannot sin, because he is born of God. By this the children of God and the children of the devil are obvious: anyone who does not practice righteousness is not of God, nor the one who does not love his brother” (1 John 3:8-10).

The emphasis of John’s teaching is the word practice[present active participle of poieo, to make or to do]. It speaks of continuous action. The devil wishes to keep believers pre-occupied with sin without experiencing victory. It is God’s plan that believers live in a continuous action of doing righteousness, that which is right. This controversial passage is not teaching sinless perfection, but rather that when the believer is operating in his old self (see Ephesians 4:22-24), he will be influenced to sin. On the other hand, the new self. The new man cannot sin since he is under the influence of the Holy Spirit.

Jesus deals with the Pharisees regarding this matter in John 8 when He challenges their ability to understand [literally hear] His word (verse 43). He tells them that they are of their father, the devil and as a result, they are pre-occupied with doing his desires. In verse 44, “He was a murderer from the beginning and does not stand in the truth because there is no truth in him. Whenever he speaks a lie, he speaks from his own nature, for he is a liar and the father of lies.” Jesus places the whole matter on the altar of the truth verses a lie. The true believer, operating under the power of the Holy Spirit is only interested in the truth. The new covenant believer is all about truth and the Holy Spirit, the Spirit of Truth, is always communicating that which is true. The Greek word for truth is aletheia and it is also translated “reality”, so the things that the believer hears is reality from God’s perspective.

“Truthful lips will be established forever, but a lying tongue is only for a moment. Deceit is in the heart of those who devise evil, but counselors of peace have joy” (Proverbs 12:19-20).

The apostle Paul helps us understand the nature of that warfare in 2Corinthians 10:3-5, “For though we walk in the flesh, we do not war according to the flesh, for the weapons of our warfare are not of the flesh, but divinely powerful for the destruction of fortresses. We are destroying speculations and every lofty thing raised up against the knowledge of God, and we are taking every thought captive to the obedience of Christ.” So much of this warfare surrounds one’s thought life and that the battle is fought around thoughts, speculations [logismos–considerations, reflections] that devalue the things of God, the knowledge of God, placing something or someone else in His place. This battle is fought in the spiritual realm, empowered by the Holy Spirit and intends to destroy fortifications or strongholds that have successfully invaded the believer’s mind.

“Finally, be strong in the Lord and in the strength of His might. Put on the full armor of God, so that you will be able to stand firm against the schemes of the devil. For our struggle is not against flesh and blood, but against the rulers, against the powers, against the world forces of this darkness, against the spiritual forces of wickedness in the heavenly places. Therefore, take up the full armor of God, so that you will be able to resist in the evil day, and having done everything, to stand firm. Stand firm therefore, HAVING GIRDED YOUR LOINS WITH TRUTH, and HAVING PUT ON THE BREASTPLATE OF RIGHTEOUSNESS, and having shod YOUR FEET WITH THE PREPARATION OF THE GOSPEL OF PEACE; in addition to all, taking up the shield of faith with which you will be able to extinguish all the flaming arrows of the evil one. And take THE HELMET OF SALVATION, and the sword of the Spirit, which is the word of God. With all prayer and petition pray at all times in the Spirit, and with this in view, be on the alert with all perseverance and petition for all the saints.” (Ephesians 6:10-19)

In Ephesians 6, Paul defines for us the weapons of the battle as armor. He begins by reminding the believer that the ability to overcome evil is not inherent in man, but it comes from God; the battle is the Lord’s. In putting on the full armor of God, we put on His strength. The believer’s role is to stand firm [hestemi – stand fast], having adorned the spiritual armor, including the loins girded with truth. It means that the truth [reality] of God and His Word is the core (loins) of a believer’s life so he operates with integrity. He also puts on the breastplate of righteousness, armor that covers the body from the neck to the waist and speaks to the believer who chooses to live his life according to God’s righteousness, that which is right. Feet (with the preparation of the gospel of peace) speaks not only of one’s walk with God as one of peace (Romans 5:1), but also one’s willingness to share it with others.

There is also the shield of faith and the helmet of salvation. One’s individual faith in the promises of God protects him from the fiery darts of the devil and his assurance of his salvation protects his mind from evil thoughts. The sword of the Spirit, a reference to the Word of God gives us both an offensive and defensive weapon against that which is not true. When Hebrews 4:12 speaks of the Word of God as living and powerful and sharper than any two-edged sword, it does its work in the heart and the mindto separate the soulish thoughts from the spiritual ones, allowing the believer discernment in warfare. Over and over again, Jesus utilized the truth of the Word of God when confronted by His enemies (and even the devil in Matthew 4:1-11)with the statement, “it is written”.He recognized the authority that it conveyed in challenging those who would question God’s dominion over all things.

Finally, the emphasis in “all prayer and petition pray at all times in the Spirit” calls on the spiritual power of God to respond to every attack meant to dethrone God in the believer’s heart and His rightful place. It is prayer that provides the energy to “stand firm against the schemes of the devil.” It is the power of the Holy Spirit that “also helps our weakness; for we do not know how to pray as we should, but the Spirit Himself intercedes for us with groanings too deep for words; and He who searches the hearts knows what the mind of the Spirit is, because He intercedes for the saints according to the will of God”(Romans 8:26-27).

“Submit [to be placed in subjection under] therefore to God. Resist [to stand against]the devil and he will flee from you” (James 4:7).This encouragement to resist is contrasted with verse 6, where God is doing the resisting of the proud, while giving grace to the humble. This resistance comes from a firmness in the faith (1 Peter 5:9), and a full reliance on the power of God.